Welcome to The Fang. This is the official blog for The Goth List, the place to hear the “stream of consciousness.” This is also the place to get updates across our entire network of sites, including Dark Existence and Doomsday DVD. Watch for developments on new additions to our network – vampsingles.com and gothlover.com.

A new review for Cheezy Flicks’ release of Dr. Jekyll’s Dungeon has been posted. I’m currently tapping into the video nostalgia vein and will be doing another “Be Kind, Rewind” review on Paragon’s Dr. Butcher MD VHS. There are also updated schedules at DOOMSDAY TV.

Summer is nearly here and my movie-viewing is kicking into high-gear. Between Monsters HD, the Summer Camp Cinema at the Cinema Arts Centre here in NY and my “wine list” of films, I’ll be pretty busy. Keepithere. 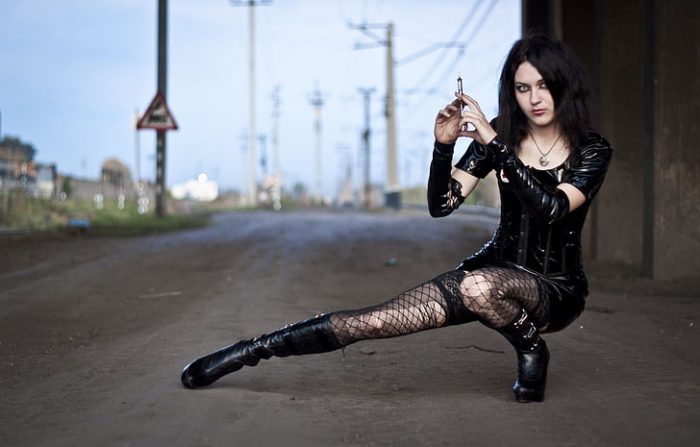 I know it’s been a while (not to mention that I skipped a post last month), but there are reviews of both Classic Media’s Terror of Mechagodzilla and the series hosted by Dracula himself, Christopher Lee – 100 Years of Horror. There are also updated schedules at DOOMSDAY TV.

Aside from all the personal crap, I’m working on a bunch of new reviews to be posted in the coming months. They include a Be Kind Rewind review for Paragon’s Dr. Butcher VHS from 1984, standard DVD reviews for Godzilla and Other Movie Monsters, Dr. Jekyl’s Dungeon of Death, 100 Years of Horror and HD reviews of A Return to Salem’s Lot and Night of the Creeps. In addition, there will be a new feature added to the reviews – “Come On, Already!” – reviews for films (that exist in either stellar television presentation or have a solid LaserDisc, R2 or R3 DVD release) that have yet to be given a Region 1 DVD release (or a proper Region 1 DVD release). Watch for these and more dreary and scathing poetry. Keep yourself posted…..

A new “Be Kind – Rewind” review of Zombiethon (released by Wizard Video in 1986!) has been posted! Come back for more…..

New poetry has been posted in the in the dark poetry section. I’m sure you’ll find it uplifting….. 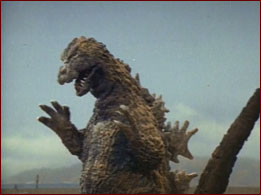 I don’t want you all to keep guessing why – a few of the topsite lists have been put on moratorium (the lists are still active, just not accepting new registrants). I’m working on a solution to the problem. This is due to clowns spamming the lists with sites that are not related, are incoherent and do not post the required reciprocal voting code. You suck, clowns!

Not that this is here nor there, but don’t you hate it when someone drops you from their myspace friend list? I don’t ordinarily frequent my profile(s), but I noticed that a few people I used to know (who still have very active profiles) decided to drop me for no good reason. Should there be a name for these people, like the clowns classified in the above paragraph? Hmmmm…… I think that these people should be classified as (entering data into glossary file) two names: Moe and Ron. It’s not hard to figure out.

A few new domains are in the process of becoming part of the network of sites. More news to follow…..

The long promised update to the Godzilla Vs. Mothra review is finally up, along with an updated DOOMSDAY TV schedule. There is also new writing in the dark poetry section. 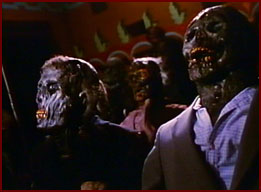 Not a whole lot of news over here. Just tidying up the loose ends on our network of sites, getting things up to speed. Too many clowns trying to get on the lists, a complete waste of time getting rid of them. Time for a new strategy.

The new film, CLOVERFIELD (produced by JJ Abrams, set to open January 18th), looks pretty interesting. It’s another giant monster film set in New York. People are clamoring all over the net for information that would confirm exactly what the monster is. Lots of fan art, analysis of the theatrical trailer (faintly revealing part of the monster) and heavy amounts of reasoning has lead the masses in many directions. One of the most interesting observations is that the monster may really be Zilla, the titular creature from the 1998 film by Devlin and Emmerich, GODZILLA. Who knows? We’ll find out on the 18th.

After a few weeks of not caring about anything, I’ve returned to admin hell. With the onslaught of the giant waves of clowns out there, I need a life-preserver. A bunch of other stuff went out-of-whack as well, but all seems to be normal now (or at least for me, normal).

January’s schedule is up, along with a posted clip from Christmas Evil. 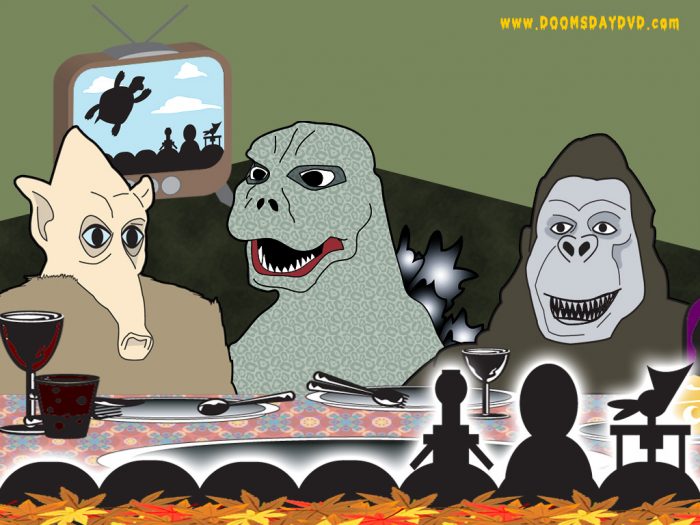 Happy Thanksgiving! I know, it’s a little early. With the big weekend upon us, we can reflect and re-create the cinematic and televised events of years past by following and participating in DOOMSDAY TV’s KaijuKong schedule. For those who either need some background or don’t have time to participate (but still want to re-live the nostalgia), this focuses on re-creating the WOR-TV Channel 9 Thanksgiving weekend giant monster movie marathons and the Mystery Science Theatre 3000 marathons of years past. So hunt down these movies on VHS or DVD, and participate with the rest of the viewing community to re-create the experience! For further nostalgia (and further information), take a look at the following reviews:

Have a safe and wonderful holiday, and check back for more updates!